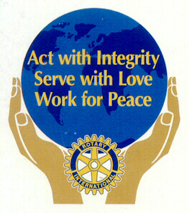 Herb Brown was born in Iota, Louisiana and moved to Clearwater, Florida in 1970. He attended the University of South Louisiana and Eckerd College. He has been chairman and president of several banks and retail companies in both Florida and Louisiana. He was Senior Vice President and Board Member of Jack Eckerd Corporation. He was Chairman of the Board of Checkers-Drive In Restaurants from 1989 to 1995 when he resigned to accept the presidency of Rotary International. During this time, he traveled to approximately 85 countries working on humanitarian and educational programs. He has been a member of Rotary International since 1945 and has over 60 years of perfect attendance. In Rotary Mr. Brown has served as District Governor, Area Coordinator, President’s Aide, Foundation Trustee and Chairman, and Rotary International Director in addition to its President. From 1986 to 1990, Mr. Brown was the Chairman of The Rotary International Polio Plus Campaign Committee where he helped raise over $125 million dollars in the United States and more than 240 million worldwide to help immunize more than 2 billion children over the world.

A recipient of RI’s Service Above Self Award, he has also received the Rotary Foundation’s Citation for Meritorious Service, the Rotary Foundation Distinguished Service Award and the PolioPlus Pioneer Award. Mr. Brown is past commander of the American Legion in Louisiana and served for 14 years as a trustee of The Morton F. Plant Hospital in Clearwater, Florida. Mr. Brown has worked hard on promoting his Rotary theme: Act with Integrity, Serve with Love, Work for Peace.

Among his many awards as a businessman, he was inducted into the Tampa Bay Business Hall of Fame and named Florida Entrepreneur of the Year in 1991. Herb Brown has been selected to Who’s Who in the World and Who’s Who in America for many years. He has received honorary doctorate degrees from four universities around the world.

In 2012, Herb Brown was interviewed for Tampa Bay PBS affiliate WEDU for their program “Suncoast Business Forum”. View the interview below.